Every few days I check in on a few Facebook pages and Twitter accounts associated with the Irish Alt-Right and/or patriots. It’s a bad habit that just makes me, in turns, irritated, angry or frustrated with people. Watching folk with answers, searching for material to reinforce their conclusions and riling up the converted – dogwhistling, sharing monetised clickbait, ‘patriotic’ memes and confused opinion videos. Generally saying things without saying things – if you know what I mean.

Yes, it’s a bad and draining habit, but I have a few people close to me who have disappeared down this rabbit hole and returned with various badly researched and radicalised anti-immigration, homophobic, sexist and downright grim opinions. Trawling through these places gives me the ‘issue-of-the-week’ so I can be prepared to counter the next conversation or conversion attempt. A common response from someone trying to convert you without the facts is: “It’s all on the internet, just research it”. I often do, ahead of time. To save time.

Anyway, let’s look at how YouTube has been treating me this week…

I use YouTube for a number of things. Film reviews, electronics tutorials, history, antique weapons and cool maker people. It’s not a place I look for politics – Left or right. I prefer to read this stuff from a variety of sources, rather than have someone give me an edited audio/visual account. Video (and YouTube) is very powerful. I’m constantly being asked to watch over-long videos by random pub-bores supporting whatever problem you have with the world – transgenderism, immigration, etc.

This week, a video from Scandinavian airlines (SAS) – What Is Truly Scandinavian – was being shared in these forums as an example of inclusivity gone too far. I decided to take a look and see what the problem was. At least I might see a hungry PR company making a mess or courting controversy. 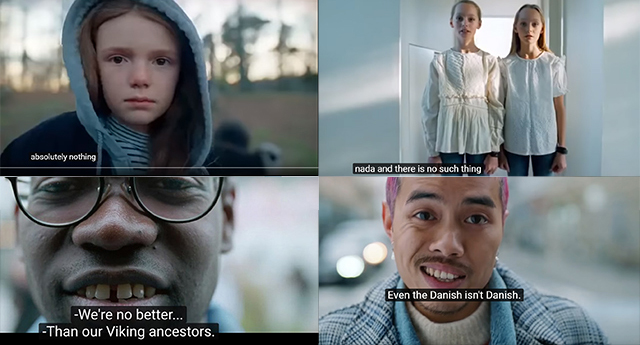 The video was fine. At least for anyone who was secure in themselves, didn’t have a problem with foreigners and didn’t have an unhealthy case of The Nationalisms. It was a reminder that much of what is familiar about our culture often has distant roots in other countries and was encouraging of the benefits of travelling. An obvious sentiment from a company that wants you to travel – with them.

In retrospect, catnip for keyboard warriors. With a wry smile, I went back to my business of checking in with my YouTube subscriptions. Nothing new there.

Recently, YouTube changed their landing page (for me at least) and it now just has a big grid of suggested videos, ranging from videos I have already see to some fairly random TV shows and music videos. It is as if YouTube just doesn’t quite know what I want and is trying everything that works on other people. I like it that way. In a previous time, I cleared and disabled my history and would tell YouTube when I wasn’t interested in a suggested video (when it was easier). YouTube now hides this button until you directly hover over it.

Long story short, my YouTube experience has been refreshingly unbiased and inoffensive up to this point.

This week, in amongst the “Celebrities Impersonating Other Celebrities” videos, I began to see something new. A Swedish conservative news channel was starting to appear. They wanted to tell me about “imported problems” and “free speech”. I did not want their opinion.

The next day, another Swedish anti-immigration mouthpiece (associated with NordFront) was suggested. The next day, UK conservative channels and pundits were being suggested to me.

BTW, I did report and “not interested” each of these videos, using YouTube’s now invisible button.

I left Facebook after 12 years of solid data-soldiering for this kind of crap.

So, I watched a video from a large corporation, promoting their airline, which conservative and alt-right folk got triggered by and now YouTube thinks I should start exploring the conservative darknet! Why not a Leftist viewpoint, an unbiased news source or just some suggested videos about cool airplanes? Why is this being suggested to a person who watches videos of old men shaping metal on lathes for an evening’s enjoyment?

On a side note, my siblings were complaining that my lovely mother had become obsessed with the British royal family, to the degree that she seemed unable to talk about anything else. On my last visit, I saw that she had begun to use YouTube on the Samsung tablet I bought her last year. I’m often happy that one of my parents starts using a new app or service. To me it’s a sign of good design and a reminder that my parents still have technologically engaged minds (if there’s a need), even though they pretend not to.

On my last visit, I decided to take a look (with permission) at my mother’s YouTube history to see what was being suggested to her. No surprise, it was a litany of tabloid shorts about Meghan, Harry and the rest of the Queen’s kids. Starting with a couple of of articles and videos on the BBC app, YouTube had turned my mother into North Kerry’s Anglo-Regal expert.

I have no problem with someone bingeing on their preferred guilty pleasures, but I could see it consuming a part of her. Externally fine, she would slowly find herself swinging the conversation to Meghan and Harry without knowing it, and in quiet times I could see her worrying and thinking about something. I’m going to spend some time on her YouTube, adjusting her history with healthier videos – meditation, yoga, puppies and other things that she participates in IRL.